We are very glad to announce our participation at Poppositions Brussel.

For its fifth edition, experimental Brussels-based fair, POPPOSITIONS, has turned the tables on the collectors who typically populate art fair aisles. While a strong contingent of galleries still make up the selling portion of the affair, POPPOSITIONS also tapped five top-notch Belgian collectors to present “Do you have ‘barbaric taste’?” a selection of recent acquisitions over 600 square meters of exhibition space. POPPOSITIONS is a young, international fair, based in an old post office building and focusing on 40 young galleries, nonprofit and artist-run spaces, and curatorial initiatives. Liv Vaisberg founded the fair four years ago to run alongside Art Brussels. “We are positioning ourselves as an ongoing critical discourse of the fair model—recognizing it as a necessary evil. We want to show that we can experiment on the art economy outside the prevailing art market models,” she explains.

The show, which takes place over an entire floor of the fair, includes 800 works lent by five major collectors—Galila Hollander, Benoît du Roy, Frédéric de Goldschmidt, Cédric and Cookie Liénart van Lidth de Jeude, and Alain Servais. All the pieces on display have been acquired in the last 10 years and cost under 8,000 euros each. The exhibition itself is being curated not by the collectors but by the outside team of Les Commissaires Anonymes and Nicolas de Ribou, who oversees Servais’s personal collection.

“The Belgian collecting scene favors sharing and cooperation rather than competition,” Servais points out. “Many collectors and particularly those five involved are often visiting each other, discussing their acquisitions and sharing information.” Servais and de Goldschmidt have been supporters of the fair since its second edition. When they discovered POPPOSITIONS had spare space in its 2015 edition, they proposed the concept of a self-financed exhibition and invited the others to take part.

“I am convinced that today is a time where a huge gap has opened up between the cultural and the monetary value of work, with a part of the art market trying to convince new buyers that what is expensive is relevant culturally,” Servais notes.

There is often a notable distance between the works being chased by the market that would fit into a more saleable space and the more challenging pieces that are praised by critics and institutions—especially with younger artists.The role of the collector here is interesting. Servais sees a Europe, which in the grip of austerity cuts is (sadly) moving more in line with the U.S., where the effective privatization of culture is normal. As de Goldschmidt notes, “In countries such as Belgium with little state support for the arts, contemporary artists would not be able to get recognition and exposure without collectors.” Yet the breadth of taste and conversation within this project emphasizes a desire for creative collecting and new, outside-the-box ways to financially support the art world.

Black a question of the material?

'An interesting new player in the Zurich scene, with some pretty high-impact shows in its arsenal, such as the complex, and often heartbreaking, political-personal-historical satires of Vietnamese painter Xuan Huy Nguyen (the artists first exhibition in Switzerland), or the varied and surprising (it's rare to be able to use that latter adjective without irony in today's art world) paintings, photographs and installations of Swiss duo Bachmann/Banz' 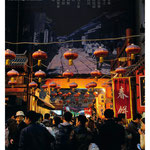 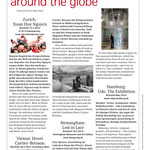